Why is it soo hard to find someone to love?

Come on… I am a nice guy. I am sincere, sweet, a wonderful person, who can make any woman truly happy. If she really interested in a sincere guy. So, why can I not find just one woman, a woman I like and can fall in love with, to pay me a little attention? I would pay her the attention she wants if she let me. Yet, why do they always ignore me?

Is it my skin, if I could I would rip it from my body… is it because I am fat? Why should that matter, am I not one who can love and give love. If I bleed is it not the same blood as any other guy? Yet, I seem always playing the fifth fiddle, I cannot even get placed into second fiddle. Even the friends who know me better than anybody, do not even give me a second glance. Why?

“How soon is now?” is like the song that plays over and over in my life. I am the son, I am the heir, of nothing in particular… I am the son and heir….. How can you say, I go about things the wrong way, I am human and I need to be loved, Just like everyone else does….

So…. here I am… searching… in vain…. time and time again… looking for someone to have a sincere heart who would see me. Give me the love I could give to thee. It’s all I ask its all I plea, but the world never hears me. What bitter is the fortune, that some may carry, if only the burden be lifted and the heart lightened, maybe I could one day have faith in thee.

I really do not know why so called friends do this….. try to set you up with people you obviously do not want to know, and people you obviously would not like. Worse they think its fun!!!!! Fun? To put you on a spot, speaking to someone you didnt want to meet? And worse, they refuse to admit that they set you up. Geez!!!!! WTF are they thinking? That somehow, we soo depressed we fall in love and fuck some ugly slut? Please friends, do not set us up with someone you know who is a social basket-case, who tries too hard to please and complete suckups. Worse, please don’t set us up without asking first, or even letting know who the fuck you going to try to set us up with. Why? because we are not going to speak to either of you again!!!!! STOP INSULTING OUR INTELLIGENCE!!!! WE NOT FUCKING STUPID!!!!

Last night, again I was called upon to wear the mask of Savior, this time I do not know what happened and my best attempts seemed to be in vain. A girl 17 messaged me, named Layla from Roschester NY, a lesbian, who seemed to be interested in making friends. That was two days ago, and yes she was depressed. I tried my best with her, didnt see much improvement, laughed and joked with her and she laughed too. Last night she told me she was going to kill herself. I tried my best to get her to talk to me. Tried to tell her that she can’t do that just as we were beginning our friendship. But online, you cannot force someone to stay and talk to you. She didnt want to say why she wanted to kill herself. I could not get her to open up. She went offline, leaving me with the notion that I might never see her online again. I have since not heared from her. I wrote her a letter last night trying agian (hoping she read it) to tell her that she can talk to me.

I do not know if she has or has not killed herself. I not seen her, and can only assume the worse. Again I was called reluctantly to be some sort of savior, something I wish would not fall in my lap. Yet, always seems to.

I can only hope that she didn’t go through with it. But I feel I gained another ghost upon my shoulders. And again I question why it seems that the lost seek me, and I am called upon to be savior, when a god I am not.

UPDATE: She is still alive, but refuses to talk about it. There is nothing I can do, if she remains closed to me.

After much debate. I have decided to finally reinstall Windows XP. Hopefully it will eliminate some of the problems with accessing certain resources online. Failing this, the only people I could blame is my local ISP for blocking ports that need not be blocked.

This is one of the steps towards freedom from Windows, I am making. Eventually, I leave it and migrate into Linux. Once, I found suitable, easy to use, and mature software products that will allow me to get what I want done without having to look back over my shoulder at Windows.

There was a time (move than ten years ago) when I was free from Microsoft and Windows. Back then I used IBM OS/2 Warp 3.0. My applications were basically IBM Works. And I had very little need to even use the Virtual Windows 3.1 Emulator built into OS/2. I long for those good old days. I had having been forced because of the lack of applications and support for the OS/2 platform. I wished developers at the time were more serious about it. OS/2 was impressive, the things I could do with it, I never been able to achieve since. Although it should be possible with any operating system today. Using REXX to integrate command threads to accomplish different tasks with interprocesss communication, is something nearly impossible without hardcoding in other operating systems.

Furthermore, if a DLL existed on your system, and it had a documented function list it provided, it was so very easily to make that DLL into command extensions to the REXX language.

Anyway back to dreaming of Mainframe power in your palm… 🙂

My God!!!! What is wrong with people today. Late yesterday evening, I received an a message on AIM from “BeautifulBxxxx”. Who had the mistaken notion that I was someone she knew by the name of Adam. I told her repeated times I was not him. I went so far as show her my geocities page so she can see I am definately not Adam.

She was not convinced, she kept trying to insist I was kidding her. Worse is she begain to get insulting. I sent her a warning and then blocked her from contacting me.

Later, I checked my guestbook only to find a even more insulting message from this woman. She didn’t specify her email so as to avoid getting confronted. What kind of world do we live in when being polite gets you to be insulted? I did not message her, I was noteven trying to pick her up. I just was not the guy she thought. He LIED to her and gave her my SN. I DID NOTHING!!!!!

Needless to say, I cannot contact her right now to give her a piece of my mind. Because now she definately earned my wrath. Thus, she is still blocked on my contact list, but I am waiting to see her online and then I will unblock her… give her a long piece of my mind…. then block her ass again.

The more I look at people you find online…. it seems more and more we have idiots who sit behind their personal computers and think this is a safe way to behave like fricking a**holes. But what they do not realise is fate is a bitch and they going to get bitchslapped sooner or later.

Yeah, no doubt she a redneck slut who has screwed her brother, uncle and cousin; and has a multiple case of various STDs. So who in their right mind would want to lay her?

SO MY DEAR “BEAUTIFULBXXXX” GO SCREW YOURSELF YOU SLUT!!!!!!! 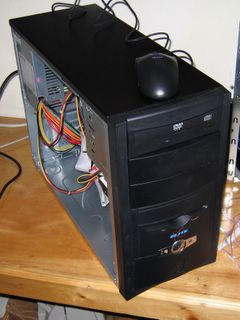 Here is an idea, maybe I or someone might try eventually. Starting from scratch …. rebuild, update and implement a complete clone of the Workplace shell but for Linux. I wonder if it can be done. IBM is working on BlueDesktop for Linux, could that also mean a version of the workplace shell? I guess we have to wait to see, when it becaomes available. But, if it isn’t a WPS for Linux. Maybe we should start thinking of making one.

The features would be as follows:

Is it possible, to bring back the most advanced desktop ever created for a new generation?

It is worth thinking about and maybe doing….

Winamp the best replacement player for Windows is almost gone. The last of the original team is gone and all AOL has retained is a few programmers to do updates till the plug is finally pulled. Gone will be the most awesome media player. What will the future mean, will sonique become the new flagship or will everyone settle for the poor Windows Media Player.

I for one will be burning a copy of my WinAmp installer and keep it safe for future use. WinAmp has no equal. When it is gone there will be no other player as well made without the usless bulk that is WMP. And since, I do support the new M4A/AAC format. It will be one I will need to keep for a long time.

Thank you WinAmp, you were there in the good times and some of us stood with you in the bad times. Thank you.